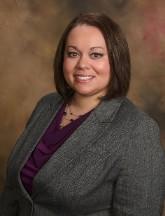 Associate Monica Tanzey joined Schmitt Law Firm in October 2016. She has been admitted to the Missouri Bar since 2011 and spent the 5 years before joining our firm as a general practice attorney for another firm in Missouri.

Ms. Tanzey received her Bachelor of Science degree in Journalism and Public Relations from West Virginia University in 2004. During her time at WVU, she excelled on the rowing team and was a member of the Student Government Association, as well as a volunteer for CASA for Kids. She then went on to receive her Juris Doctorate in 2010 from Oklahoma City University School of Law, graduating in the top third of her class.

While in law school, Ms. Tanzey received a number of awards, including the Dean’s Honor Roll, the Dean’s Pro-Bono and Public Service Award, and top honors in her trial advocacy class. Monica also received certificates in Health Law and ADR after completing specialized coursework.

Monica also holds an MBA in Healthcare Management, which she received in 2013. She focused her master’s thesis/capstone on nursing home compliance and best practices. Today, Ms. Tanzey has a special interest in nursing home negligence and wrongful death cases.

When not at work, Monica loves to spend time with her husband and their son. She also enjoys raising and training Goldendoodles. She is an avoid mountaineering fanatic and loves to camp, trout fish, and volunteer in the local community.

OUR INSIGHTFUL ATTORNEYS KNOW THE INSURANCE COMPANIES’ SCHEMES INSIDE & OUT

The information on this website is for general information purposes only. Nothing on this site should be taken as legal advice for any individual case or situation. This information is not intended to create, and receipt or viewing does not constitute, an attorney-client relationship.